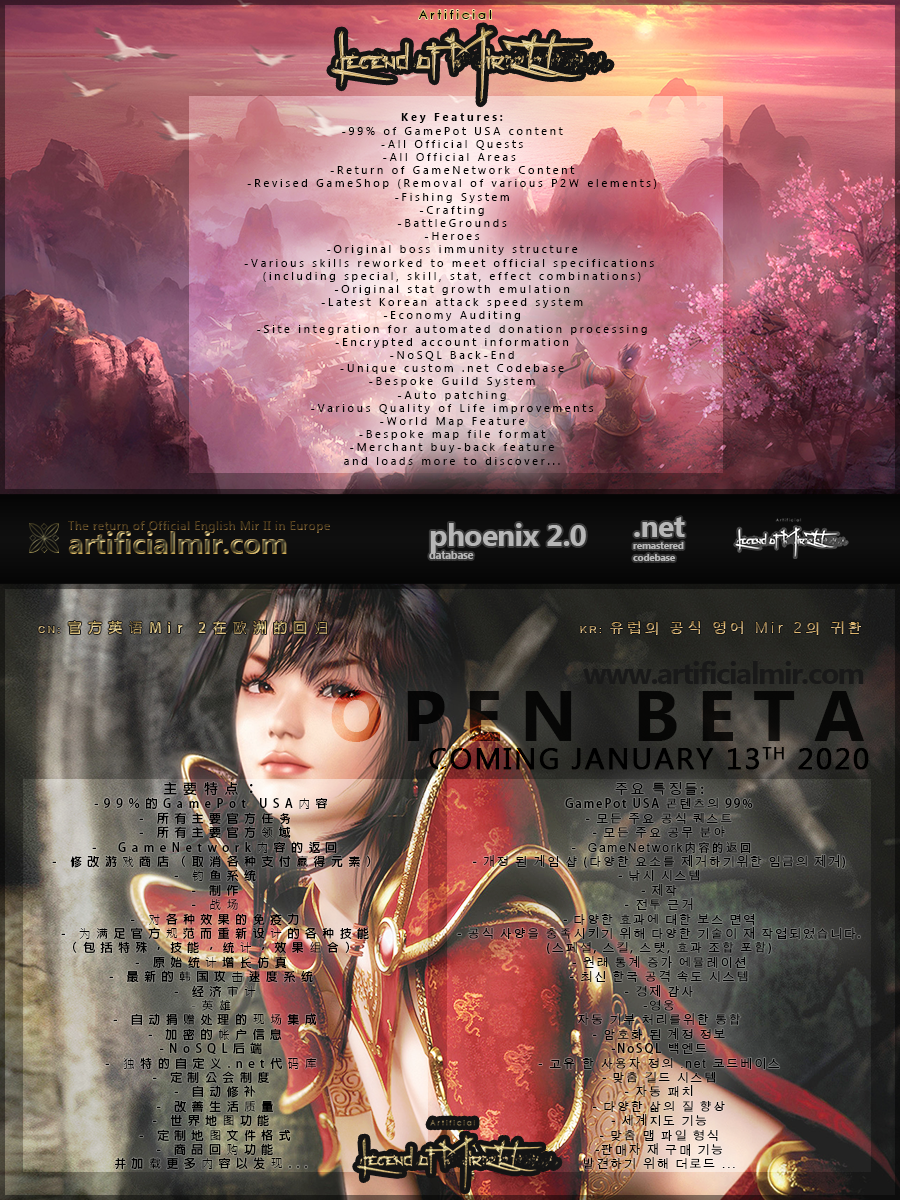 Open BETA Testing is finally upon us. Commencing 13/01/2020, everyone will be able to get involved and test the in-development files. We will update the download links on the website as soon as the server is open on 13/01. (www.artificialmir.com/downloads)

We are still working on many aspects of the files even now, and will continue to work towards our release milestone during Open BETA. This will take time, and our test duration will be extended to accommodate for this. This is the first time we will be opening the Phoenix 2.0 files up for anyone to test and get involved in our development process.

Current plans are for BETA to last anything from 8 weeks to 24 weeks depending on how many issues we face and how fast we can implement the currently missing and/or broken features. At the end of the extended BETA test, there will be 1 final wipe before full launch/release.

Introducing our new Identity service. This platform serves as a centralised hub for all Artificial Mir II authentication purposes. It allows you to log in to the online Game and Website services using a single account.

To use this service and create a new account, please use the link provided below:

It’s important to note, for the first time we are introducing Encrypted/Hashed credentials to Mir II. This means it is important you use proper email and recovery information to protect your account when you register with us.

All accounts will be preserved for log on and authentication purposes through to launch; We will never share any of your personal details, information or data with 3rd parties.

After what has been a frantic few months for our admin team we’re imminently looking to implement our 0.2.0 baseline files set patch. It’s hard to put into words to describe how much this means for our team. Essentially the culmination of a development timeline which has stretched back over 18months, and has been influenced and united by 3 ambitious Legend of Mir II projects: Legend of Mir Sagas, Artificial Mir II and most recently Nostalgia of Mir.

The latter part of 2018 was enormously challenging for me, I had complex personal issues to contend with, and our key developer Logham was incredibly invested in his relocation elsewhere in Europe. At times I had to put continuing the project into question, I’d invested a lot of time and money into this personally, which was very difficult for any sane person to justify continuing to do, given my position. The Phoenix server had remained almost completely unpatched since it’s inception, partly due to the non-stop accumulation of issues in addition to ambitious development goals and personally, I felt up against a number of unsurpassable dead ends with the files and with no release in the foreseeable future imaginable. Against all odds, the test server did, fortunately, persist in its current form, and still continued to receive regular albeit unpublished changes (more of these soon).

Completely out of the blue; in a twist of fate around November 2018, I was contacted by in my eyes another very prestigious LOMCN VIP and developer: Chriz. Chriz had been working on developing a Mir II server with a very similar end goal in mind but had been struggling to tackle a lot like us, the colossal task of pulling together viable baseline set of files using the existing C# resources on his own. After some discussion, we realised we quite quickly our project and goals were complimentary and joined forces bringing together the best of both projects, ultimately rounding out the Artificial team. Chriz has already proven the catalyst we needed to get to release standards and brought a whole host of new Quality of Life features we hadn’t even considered to live in this upcoming update

What does 0.2.0 mean for aspiring players? Essentially this is the unification of 3 major elements: sleek new refactored pure .net codebase and modernized live DB backend; new feature set, bug fixes, Delphi file set emulation, general client-side improvements with other NoM enhancements; all this combined with the most recent Phoenix database and environment files bringing together our first major release candidate, and laying the foundations for many more.

Over the last 18 months, every issue reported on Phoenix server was meticulously documented during testing and 0.2.0 has sought about to fix every issue reported to us during that time, whilst adding all the much needed new features to bring us incredibly close to achieving full GamePot USA+ content standard upon release – believe me when I say this was an enormous task. There will be more posts to follow with even more technical information as well as developer notes and our complete changelogs. In addition to more information about potential upcoming exclusive testing opportunities and a formal release date for Phoenix 0.2.0.